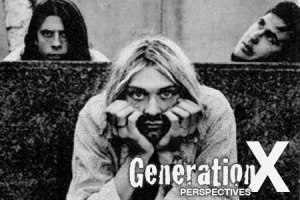 I am a member of generation X and I’m guessing if you’re reading this then so are you.

We were born between 1961 and 1981. We are the babies of the Baby Boomers, sometimes charmingly referred to as the Baby Busters. We are the fallout from the summer of love, the detritus left behind on the floor after Woodstock, the children of mothers who took just a little too much LSD and forgot to take their new contraceptive pills. Every good party must come to an end, and that end is often a regretful hangover, or in this case us, Generation X.

What are we, what are our characteristics? Commonly used vocabulary attached to Generation X’ers is cynical, apathetic, skeptical, bitter, grunge, goth, consumerism, globalization, conspiracy theorists. What defines us though is that we were the first generation to experience the draw backs of modernity. Mass production, mass consumerism, mass marketing, mass media, all were welcomed with euphoria by the Baby Boomers, but through more cynical eyes all we saw was a post-modern hell. To us it presented a treadmill of consumerism that you had to run like crazy just to stay on but got you nowhere. Sure you were allowed to buy loads of shit along the way, but you never got any further down the road, it never promised to satisfy us like it mesmerized our parents.

Generation X’ers have long been accused of being lazy, underachievers. This criticism seems to be supported when we are also referred to as the McJobbers. A reference to many of the generation being well educated but content to take menial work. I just see this again as being our refusal to get sucked into running in the wheel of greed. What’s wrong with making fries whilst pondering the nature of the universe?

By the 1980’s The Baby Boomers had grown up to become Yuppies or if they were still suffering acid flashbacks they became New Agers. The Yuppies were sold this way of life by the two most iconic post war politicians, Ronald Regan and Margaret Thatcher. Under their command both the U.S and the U.K lived by Gordon Gekko’s mantra ‘Greed is Good’. Everything the Baby Boomers did was to excess, drugs, greed, sex, consumerism. Whilst they put man on the moon Generation X’ers had the Challenger disaster. They had Martin Luther King and the Black Civil Rights Movement, Generation X’ers had Ricky Martin and Black Monday. While the Baby Boomers were the first generation to enjoy the 24 hour convenience of 7/11, Generation X’ers had the inconvenience of 9/11 to deal with.

I might be coming across bitter, many Generation X’ers are bitter because we’ve got so many reasons to be. It’s like we turned up half an hour after the end of an enormous party, and who wouldn’t feel a little put out by missing a whole season called the summer of love. I can assure anyone at best I’ve experienced a week of love, but those baby booming bastards had an entire summer.

It’s too late for us Generation X’ers to make up for lost time. The ship has sailed and we must content ourselves with iPhones and mediocrity. How history will judge us only time will tell, but one thing I do know is that whatever the verdict, Generation X’ers are unlikely to give a shit.