Degenerative Personality Disorder, Regressive Emotional Development Syndrome, or simply, irresponsible selfish wanker, are all terms that can equally be applied to me. The medical profession however prefer a more tactful approach, they try to keep me sweet in order to make more money out of me, so to them I am Bipolar, Manic-depressive. It’s a title that costs me a couple of hundred dollars a month in drugs to retain, think of a hook and get the interest of the reader god dam it; like I said I’m a selfish wanker who couldn’t care less whether you read this or not, in fact I only write it in the hope that it will provide me with some ultimately defining cathartic experience, a moment of clarity, an epiphany that will enable me to walk away from myself .

“It had already begun by the time I was so unsure as to how I got to be sitting in the Thai Airways Executive departure lounge. I quickly put a stop to asking myself such questions and just accepted it for what it was. When your in the throes of a manic episode the temptation is to give in to it, let it take control, to ride it out and see where it ends.

It’s two o’clock in the morning. I’m in a room at the holiday inn Bangkok, I’m wired. I’m 700 miles from where I should be, where I’m expected to be, where people think I am. I haven’t slept for more than two hours out of the last 72 and my mind gathers momentum as it careers at breakneck speeds contemplating nothing, on the face of it not dissimilar to the mindset of your average tuk-tuk driver. But the sheer exhilaration is consuming me. People pay good money for illegal drugs that can’t get themselves half as high as this. I’m out beyond the edge, and I know that coming back from this one is going to hurt, people will have to pay for this. For as Thompson said “For every moment of triumph for every instance of beauty, many souls must be trampled”. O.k so this moment is devoid of both triumph and beauty, it’s really only the trampling of souls that applies. It’s a white knuckle ride I never remember getting on and I have no idea where to get off, when or how it stops. All I do know is that I’m not the one sitting at the controls. Out of interest I ask my best friend if there’s any link between mania and jet lag. I only ask because yesterday I feel certain that I was on a long haul flight back to Thailand recently. I’m wondering if there is a causal nature between jetlag and how I’m currently feeling and behaving, why I can’t sleep and why I keep succumbing to base impulses. Rather eloquently it informs me that disruption to the circadian rhythm can have a negative impact on people with psychiatric diseases, including manic depression. For a moment I am pleased with this, it placates me, I have found an excuse, suddenly it’s not my fault, like how the death of a friend gives an alcoholic an excuse for the day.

In a soulless hotel room nothing that surrounds me offers any comfort. Not even the prostitute who appeared and sits on the end of my bed, whose job it must be to surely fill this void, but only achieves in adding to the soullessness of the room, the situation. What is just another in a long line of improbable situations I have manufactured out of a nebulous circumstance.

One flew east, one flew west, one flew over the cuckoo’s nest. When you don’t sleep for several days it’s hard to keep track. Sleep is an effective way of demarcating the end of one day and the start of another, without it, you’re just experiencing an endless, meaningless procession of non sequitur events. Still I have been responsible enough to book a return flight early enough to get back for an appointment with the psychiatrist.

I’m in a new room now, one that’s decorated with even less imagination than the Holiday Inn. I’m sat at a table, crude strip lighting illuminates two angry men in skin tight brown uniforms sitting opposite me. The Thai police uniform has forever reminded me of what it used to be like to pass solid stools, something I have been unable to do since living in Thailand. The one that’s been playing the “good cop” suddenly stands up and walks out, slamming the heavy door behind him. His partner moves his corpulent body around to my side of the table which he sits on, looking down at me, adipose flesh stretching the seams of his uniform. He leans towards me his nose a couple of inches from my face.

“Farang have big problem, dead prostitute in farang bedroom. Bad, bad farang.” I can smell cheap cigarettes and even cheaper Thai whiskey on his breath, and as he speaks  to me some of his spittle lands on my lower lip.

He runs his hand through my hair and places his other hand in the crotch of my pants.

“Is that all?” Quizzed the psychiatrist.

I actually like my psychiatrist, he’s the one person I know is probably madder than I am. He’s a big man, thirty odd years old and with green hair. To me he always looks like a man who has insisted upon only drinking the tap water from a nuclear power plant.

“Isn’t that enough?” I answered. ”Then he rapes me. And I’ve also caught myself using two computers at a time, which upon reflection it seems a little unnecessary.”

“And why do you feel the need to do that? I mean It’s not a crime, there’s no need to feel guilty about doing this?” The psychiatrist retorted, surprising me by completely ignoring the policeman rape story.

“And on the other one I like to keep a note of what I have been doing, seeing if I can spot patterns in my cycles of mania.”

“It sounds like a very practical idea, have you noticed anything?” The psychiatrist questioned.

“Nothing definitive as yet. I like to write down things before I visit you. Try to get straight the important things that have happened. Try to put things in order and forget that this is my life, and it’s ending one moment at a time.”

“Maybe you could bring these you next time, so we could look over them?”

“Hell no! What I do during a manic binge stays strictly between me and my mania, I would die from embarrassment if anyone knew. To be honest with you who would anyway, if that’s all I’ll pick my lithium up and get out of here?” 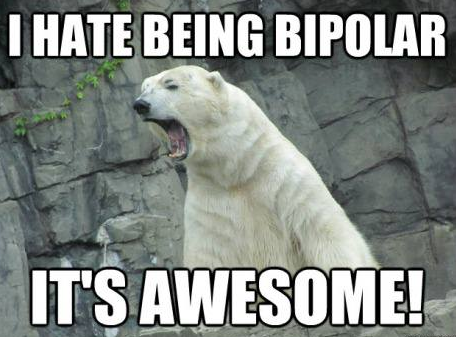