“The hero and the coward both feel the same thing. But the hero uses his fear, projects it onto his opponent, while the coward runs. It’s the same thing, fear, but it’s what you do with it that matters.”

We’ve been forced to wait a very long time. Not since the early 70s, with fights like The Rumble in the Jungle, and The Thrilla in Manila, has heavyweight boxing been this entertaining.

The last golden era in the division occurred during the career of one man, Muhammad Ali. An era which saw Ali take on fighters like Sonny Liston, Joe Frazier, George Foreman, Ken Norton, Floyd Paterson and Larry Holmes, each of whom would have been good enough to dominate in any other era. 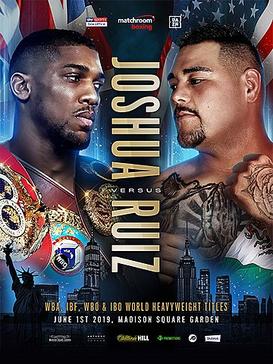 On Saturday, December 7th, Andy Ruiz will defend the heavyweight boxing titles he took from Anthony Joshua 6 months ago, in a rematch. Ruiz’s win was one of world championship boxing’s biggest upsets. Not since, 1990 and that night in Tokyo, when James ‘Buster’ Douglas knocked out a then undefeated, and what looked like an unbeatable, Mike Tyson. Ruiz’s win was a shock, there can be no doubt about that. Before the fight bookmakers had him at 9-1 against, ridiculous odds in a sport with only two competitors, and where one punch can end a fight. But those odds reflected the chance public opinion gave Ruiz when he defeated Joshua, at the beginning of June, in Madison Square Garden. The, Ruiz – Joshua rematch will formally kick-start a golden era in the heavyweight division, some might argue started already when Deontay Wilder fought a dramatic draw against Tyson Fury. There are, at the moment, five legitimate contenders for the title meaning that all of them will be less likely to cherry pick easy fights and forego a big payday. It really is a case of make hay while the sun shines, except in this case substitute hay for money, and sunshine for punching your opponent in the face.

Heavyweight title fights have historically been held in the United States and on occasions in Europe, fights outside of these two locations are very uncommon. But holding one of sports biggest prizes in an out of the way, exotic location from which neither boxer originates is not new. Such fights do, somehow, capture the imagination as well as huge piles of cash. These locations have been decided purely for the financial benefits to the boxers and the potential for generating positive publicity for the hosts. In some instances this has seen the blending of sport and morally bankrupt ideologies, which for a time are forgotten until several weeks after the fights conclusion.

January 22, 1973, The Sunshine Showdown, Kingston, Jamaica. When Foreman annihilated Frazier, knocking him down six times before scoring a technical knock out with one minute and twenty-five seconds of the second round still to go. Foreman achieved this despite going into the fight a 4-1 underdog.

The history of heavyweight boxing in obscure locations is colorful and littered with upsets. Ruiz, Joshua promises to be a far closer fight with no heavy underdog. In fact it’s much in debate as to who the underdog is.

Why Ruiz Will Win

Styles are said to make fights, it might equally as well be said that styles break fighters. Ruiz’s style couldn’t be any more awkward for Joshua. On paper, and to the eye, Joshua would win every time, but Ruiz has the box of tricks to beat Joshua. Ruiz’s main strength is his hand speed and accuracy. What this crudely translates into is, Ruiz’s fists spending more time connecting with Joshua’s head and face. Ruiz’s movement is also deceptively good, and he has proven that he has durability having been knocked down by Joshua, then coming back to destroy him. Joshua’s strength will always give him the ‘puncher’s chance’,  but Ruiz is likely to throw and land more punches. Meanwhile Joshua hasn’t convinced when under pressure of a high volume puncher. AJ was floored four times by Ruiz, ans was knocked down once when he fought Klitschko. Ruiz’s style of throwing quick combinations is AJ’s Achilles heel.

It’s ironic to remember that it was Eddie Hearn who cursed the career of Joshua when he selected him as the replacement for Jarrell Miller after the latter had failed multiple drug tests. Ruiz had only one month to prepare for the first fight, but had fought at the end of April, meaning he was already conditioned. But that should have counted for little when it came to fighting the multi titled world champion and former Olympic gold medalist. Few gave Ruiz any chance, including the bookmakers who were offering 25/1 against Ruiz winning by stoppage.To their credit, the Irish newspaper Independent.ie considered Ruiz to be more dangerous than the  originally intended opponent, Jarrell Miller.

What AJ has in size and strength, he lacks in speed and skill. That’s not to say Joshua is slow and without talent, it’s just that up until now it’s been his size and strength that have been most telling in the fights he has won, Ruiz has the skill set to neutralize Joshua’s attributes.

One of the more amusing things about the fighters is that they have both been criticised for their physiques. In the past, Andy’s figure has been on the adipose, rotund end of the conditioning spectrum. Joshua meanwhile has been criticised for being over conditioned. AJ has some glaring similarities to Frank Bruno, he carries too much muscle bulk which ultimately makes him powerful, but slow. It’s been said that Joshua is looking to address this matter, but how quickly and how successfully he can reshape his physique is a question that remains to be answered.

While it looks impressive, too much muscle slows a boxer down 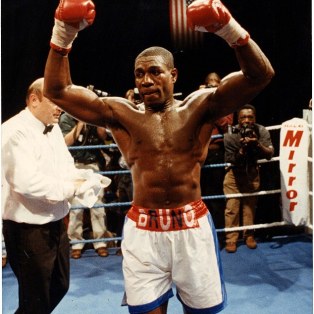 pkt5282-394323 FRANK BRUNO BOXER It was too much to expect the truth, the whole truth and nothing but the truth. This is heavyweight boxing for the big bucks after all. But when the manager of Lennox Lewis said there waws absolutely nothing bad aboiut Frank Bruno’s performance, at least he had the good grace to do so with a smile and ask: ‘Is my nose growing?’
It’s difficult not to support Ruiz, and I’m British. Ruiz is only getting 25% of the purse, and despite cutting weight  still bares a striking resemblance to British comic Johnny Vegas, a man whose act centres on him being drunk and unhealthy, but who doesn’t love Johnny Vegas? 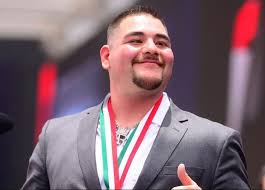 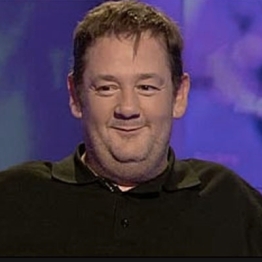 It’s not just that they’re both fat.
In the future, out of Ruiz, Fury, Usyk and Wilder, I can only see Joshua beating Wilder. The other three have far higher boxing IQ’s, far better movement and hand speed. It’s the hand speed, combined with questionable durability that makes me believe that Joshua would succumb to any of , Fury, Ruiz or Uszyk.

Twenty-twenty, might be a format of cash fueled cricket, but it will also be remembered as the year of the mega fights in heavyweight boxing. The year that should see the Fury-Wilder rematch, Uszyk fighting one of these four, and Wilder fighting Joshua or Ruiz. Be cause the division has five huge talents it’s difficult to see how these fights can be avoided, and the huge pay per view revenue any combination of these fights would make should be too tempting to resist. Twenty twenty is the year that will stay long in the memory of boxing fans around the world. And my prediction as to who will be king of the hill,

The talent of Oleksander Usyk will ensure that the heavyweight gold rush of twenty-twenty will sustain itself for a few more years, with any combination of huge fights. The countries that these fights end up being hosted in, and for what cause, remains the most difficult thing to predict.

2 thoughts on “Ruiz Vs. Joshua – A Gold Rush in a New Golden Era of Heavyweight Boxing”