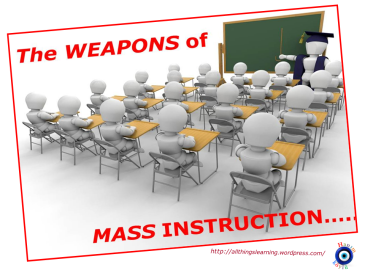 As a means of finding ways to improve what they do, teachers are expected to reflect on their practice to find things they can do better. Nothing sounds particularly alarming about that, I’m confident many other occupations encourage self awareness and improvement, but when a teacher is constrained by the standards set by a government ones reflection can become considerably restricted. Most teachers start off as idealists, after eleven years I still have my moments, moments when I feel ‘I can make a difference’. New teachers want to open up the eyes of their students to the abundance of opportunity that awaits them in the world. Over time this enthusiasm is slowly and painfully drawn out of the teachers soul, eventually leaving a hollow shell, stripped of dignity denuded of hope and with only self loathing for company. Many methods are used to achieve the complete demoralization of a teacher, but by far the most frequently used is change. Constant change to how you do something eventually leads you to conclude that you are always doing everything wrong:

We trained hard … but it seemed that every time we were beginning to form up into teams we would be reorganized. I was to learn later in life that we tend to meet any new situation by reorganizing; and a wonderful method it can be for creating the illusion of progress while producing confusion, inefficiency, and demoralization.

I am forever being informed that the common core standards are grounded in research, Burris argues strongly against this assertion, whilst also admitting to be at a loss as to which countries benchmarks they may have used. To read her three further flimflams see the link below.

In the Common Core knowledge is cut down to the essential need to knows that everyone will be taught, with teachers likely to teach to the standards not beyond them. Some might call this creating a level playing field, others the beginnings of a path to mass social control. Teachers will have a framework and a standardized rubric in which to teach and assess their students ability to think critically, something they will all have to do the same way, they will conform in their criticality because that is how to get good marks. Ultimately we will have a society that won’t be afraid to rock the boat because everyone will agree that the boat needs to be rocked. We will have a population of sheep, to serve the best interests of a small minority.

This mass production of people is not reserved purely for the working class, in his book ‘Excellent Sheep’ William Deresiewicz postulates how education at all levels is mass producing graduates to fill predetermined roles in society.

It’s a bleak and soulless scene. But nobody protests. Any doubts are allayed by presidents and deans, who tell students before they arrive and repeat after they graduate that they are the most dazzling, brilliant, gifted young people ever to enter whichever college they attend. And any crises of conscience or conduct are averted by a system that cuts the chosen ones endless slack, penalizes no misconduct and sees to it that all have prizes at the end.

Standardizing testing, standardizing curriculum if only we could standardize students and tattoo bar codes on the back of their heads.

People are not standardized and to force people through a one size fits all meat grinder of education, can be in nobodies best interests, with the exception of the ruling elite perhaps.

I wouldn’t dream of spoiling the surprise you have in store when you discover that the elaborate system of social control official schooling represents has been a vigorously worked out idea for at least 400 years. The real question you should be asking is why, in all the years of school incarceration you suffered, did nobody bother to let you in on the secret?

Often regarded as a loose canon by his peers, Gatto (New York City teacher of the year 1989,1990, 1991 and New York State teacher of the year 1991) refers to what is called ‘the hidden curriculum’, what might also be perceived as education’s hidden agenda. The hidden curriculum to which Gatto originally referred to with suspicion is today however accepted and the importance of the role schools play in socialization is being increasingly recognized;

Education is a process of socialization. It prepares the child for social living. It reforms the attitudes wrongly formed by the children. Thus a family may make the child superstitious; education will correct his beliefs and remove his prejudices. It teaches him value of discipline, social cooperation, tolerance and sacrifice. It instills in him the qualities of honesty, fair play and a sense of right and wrong. The importance of education for creating right social attitudes among youth cannot be overlooked.

With education in the west focused on standardizing itself and striving to produce standardized people, that fit neatly into a standardized society. And with much of the rest of the world receiving education through the medium of English, it’s not too hard to perceive a future hive mentality. As Huxley suggested humans of different castes all conforming to the society’s need for that caste, all consuming all asking the questions they have been taught to ask. Our standardized society is nigh. 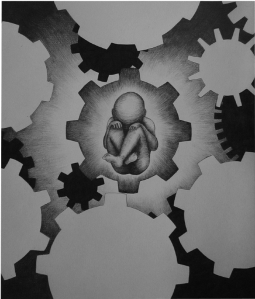