Even the most liberal defender of the freedom of speech recognizes the need to limit the very freedom for which they advocate. For example advertisements can’t be intentionally misleading, the freedom does not extend to state secrets, nor to the publishing of material of a sexual nature of children. All of these seem reasonable with perhaps one exception, who decides on what is and what isn’t a state secret? For a long time most western societies have operated comparable policies and approaches to the freedom of speech (perhaps with the exception of the former eastern bloc) and until recently with little call for concern, so what’s happened to upset the freedom of speech apple cart? Why is it that in recent times we have heard our producers of entertainment, especially comedy, offending various groups of people living within our societies? My answer may appear over simplistic but for me the growing pervasiveness of postmodernism in western thought has led to the boundaries of decency to be pushed and the bar for the bar to be lowered a forever deepening abyss of self loathing.as it takes just too much god damn effort to raise the bar, what is most commonly done is to find ever more redundant, purposeless, verging on nihilistic ways of ridiculing popular beliefs.

Postmodern humour responds to and references the fears, fixations, frameworks and technologies which underpin our postmodern existence.

Franklyn’s observation on the characteristics of postmodern humour are apt as it has been through humour that the freedom of speech has most commonly been put to the test in the age of postmodernism.

“Nothing is original. Steal from anywhere that resonates with inspiration or fuels your imagination. Devour old films, new films, music, books, paintings, photographs, poems, dreams, random conversations, architecture, bridges, street signs, trees, clouds, bodies of water, light and shadows. Select only things to steal from that speak directly to your soul. If you do this, your work (and theft) will be authentic. Authenticity is invaluable; originality is non-existent. And don’t bother concealing your thievery – celebrate it if you feel like it. In any case, always remember what Jean-Luc Godard said: “It’s not where you take things from – it’s where you take them to.”

But What About the Chihuahuas? 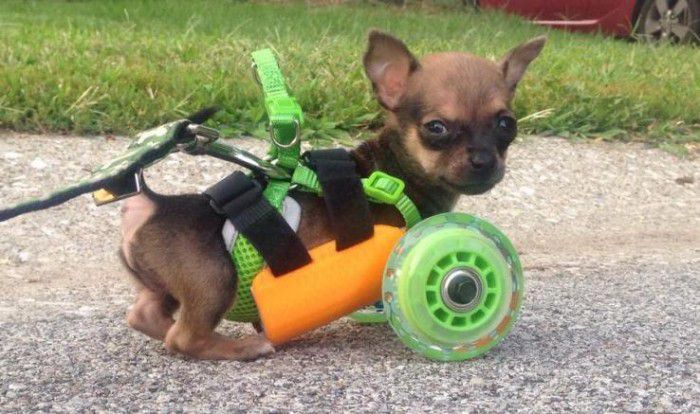 TurboRoo, Two-Legged Chihuahua, Gets New Wheels Thanks To A 3D Printer!